Families that have utilized the tutoring program through the Douglass Center in the past two decades are familiar with Marianne Cullers. After retiring from teaching, Marianne began tutoring a small group of children whose parents worked at the Douglass Cen 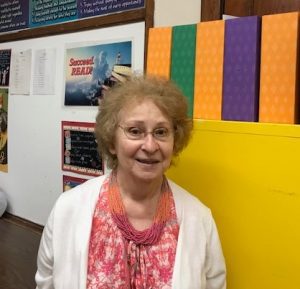 ter. All five children were all middle and high school level at the time. The tutoring of these children eventually evolved to expand to include elementary school children. As the program grew, it developed into the Hand to Hand program through the support of the Parks and Recreation department with the City of Manhattan. This was the time that Marianne began to utilize the Senior Corps RSVP program through the Flint Hills Volunteer Center for volunteers. A constant surprise for Marianne is just how much need there is by these kids in our community. While this program runs from January through December each year, Marianne has also expanded her service time to the Manhattan Area Retired Teachers Association (MARTA). Marianne joined MARTA in 1996 and has continuously given her time to it on various committees. According to Marianne, “Volunteering gives me something to get out of bed for each morning and gives meaning to my life.” One of the things that she says helps is that she is always learning, from the children and parents to the other tutors volunteering alongside her. Marianne stated, “All children can learn if they’re given the opportunity.” She spoke of several children that she’s worked with over the years that were able to come from a reading level below their grade and move on to graduate high school with honors and pursue college educations with Ivy League schools. Recently, Marianne has experienced health issues that have made her begin to consider what she could do when she was no longer able to keep up with her volunteer work. This has been a difficult phase for her, stemming back to the disappointment she felt when she first retired from teaching through the Manhattan school district. She has found interest in delving into her family’s history and learning more about where she comes from. Someone that didn’t know Marianne would consider her to be quiet, but it is easy to see the care that she puts into her program with the Douglass Center, individualizing the plans for each child’s needs. When asked about what advice Marianne would give to someone beginning to explore the concept of volunteer work, she says to “try something and see if you like it. Working with another volunteer and learning about the program you’re interested in is the best way to see if it is a good fit. There’s something for everyone.”