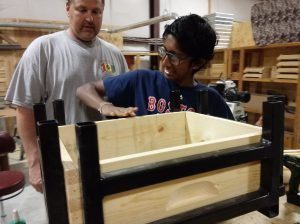 March 4, 2018. I have just arrived at the local town center. It was leadership day for the Youth Volunteer Corps, some random organization my mother found online as I was thinking at the time. I just wanted to go home, play on my phone. Just sit around and don’t anything today, but I was forced into attending this (at the time) boring event that didn’t even relate to me at all. I wasn’t very interested at first because it was just some YVC members just introducing speakers and boring stuff, but then I saw who one of the speakers was, and it was Tyrone Townsend. He was the school officer of the 9th grade center at the time and he spoke during this event. He was actually speaking about what he has to deal with at school, and it amazed me on what he discovers at our high school. My perspective of the Youth Volunteer Corps completely changed when I was asked to do an interview on the first day I was here. They had confidence in me and entrusted that I would say the right things even after they just met me. It took a couple of quality projects for me to really experience the wonders of benevolence.

Projects like this have been so impactful in ways I cannot fully describe. One of the projects that really changed me from an indolent, resistant little tween to a motivated and selfless young adult, was the project of tutoring. At the Douglass Center, we tutored some younger youth ranging from 1st to 3rd grade. We would help them with their homework, usually it being math or reading. More importantly, helped them grasp new concepts that they had struggled with in school. From about 1-3 every Wednesday in June, I’d come back to the same place with my child, who was not the most thrilled when I told him to do his work. The first time meeting him was bittersweet. He was a very capable child, flowing through most of the review problems that were already taught to him during school. His opposition came when a new concept such as multiplication. He would tell me, “no, no, I don’t want to do this, I’m not smart. Why are you making me do this?” the typical child when he’s told to perform a task that requires some thinking. So, I naturally encourage him and kept pushing him to do his work. He eventually let up sometimes and he did what he could, but some of the times where we stopped like such, I would have to get the director to come tell him personally to get back to doing the work. I was so determined to get help him out without me expressing some subtle frustration. The second Wednesday of the month (our second session), he was so confused at this certain concept, he began tearing up and started beating himself up. What happens next totally changes my perspective on this kid. Both the director and I calm him down and he wipes up his tears and does the rest of the packet, limited questions. Some of the stuff he was kind of confused on, and he asked politely. The rest of the tutoring sessions went fine from there. From that moment, I learned a valuable lesson. Never give up on something you truly believe can prosper.

This program has done so much more than just give me 100+ hours for the Distinguished service program at our school. It gives me and so many others the opportunity to help and spread the love of the wonderful community around. It gives them the opportunity to learn about how things work and function, how they our built, and who takes care of those things. Coming to at least one project just expands a child’s knowledge by just so much. Not only you get to learn about what you’re doing to help positively impact the community, but you’re actually helping out the community one volunteer at a time. Once one realizes the miraculous wonders of helping someone less fortunate out or lend a hand to someone who struggles with certain challenges that they are presented in life. You’re not just out on a Saturday because your mom wanted you to get out of the house. You’re out on a Saturday to put your life on hold in order to make someone else’s life a bit easier. And that is one of the biggest realizations I’ve had in this organization. Why am I still a member to this very day? Because why not. 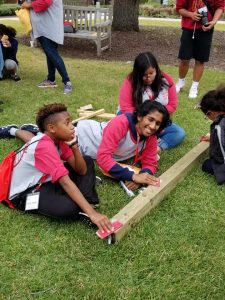 I am proud to wear a YVC t-shirt. I am proud when representing YVC to whomever asks and giving them the right response of, “a volunteering organization like no other.” What separates you from the other guys? The certain special aspect of YVC is that it’s not exclusive to anyone and literally anyone ages 11-18 can come and clean a nature trail or build crates for honey-bee jars. Volunteering has steered me into the right path in life. I can feel myself becoming a better person every time I go out and do a project in the community. Knowing that I’m abstaining from any use of drugs, sexual abuse, or any other kind of misconduct kids my age get into these days is extremely rewarding. Serving others before yourself in my religion of Buddhism is considered one of the highest acts of a human being because anyone can perform it, but it’s whether or not the person actually does it. The Youth Volunteer Corps has given me the confidence to choose what I want to do as an individual, and not having to rely on my parents as much with my decisions anymore. This organization has changed my perspective on so many levels. Knowing I have chance to help someone whenever I attend a project, really does add on to the purpose of our lives. Without a volunteer’s purpose, how can an individual make the lives of others a little bit better?