Gary Bigley, Senior Corps RSVP volunteer, is a relationship builder. When he first started volunteering after retirement, he didn’t think of himself as a people person; however, as he has gotten to know many people and developed friendships over the years, he now knows better. Gary first started volunteering with the Via Christi Hospital Auxiliary and has added several other volunteer roles where he is able to meet new friends.  Currently, in addition to his time at Via Christi, Gary delivers Friendship Meals for the Riley County Senior Services Center, assists the Flint Hills Volunteer Center’s medical transportation program helping people get to appointments, and with the Harvester’s mobile food pantry program. 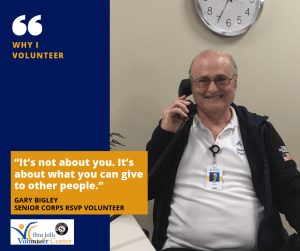 As a medical transportation driver, Gary has been able to develop a handful of friendships but one of the most special ones has been with Don. Gary was Don’s driver to his first chemo appointment where there were some complications. Gary offered his help as best he could to make sure that Don was where he needed to be and checked in on him over the following days. Their friendship grew quickly to include trips out to get food together and Gary even took Don to get his first pedicure after complaints of overgrown toenails.

Gary’s joyful personality has helped him open doors while delivering Friendship Meals. He is respectful to those he delivers to if they do not wish to talk but has found that some people open their door a little wider each time he visits as they share stories and jokes. Once, Gary commented on a man’s rubber apron when he opened the door. Soon Gary found himself in the man’s house looking through his artwork and projects. Gary learned that this man was a retired K State art professor who had been working on pieces for an upcoming gallery showing.

When he’s not volunteering, Gary enjoys spending time with his wife and being creative in the kitchen. Baking has always been something he enjoyed- making cookies as a kid, baking cinnamon rolls from scratch for friends while in the Army, and most recently smoking meat in his back yard. During Gary’s time in the Army he was stationed in Germany a few times. While in Grafenwohr he came across a small bookshop where he purchased his first western novel. He soon fell in love with the genre and became an avid reader. Gary keeps a book with him while volunteering for when it’s a slower time of day and he has no one to chat with for a few minutes.

Gary retired from the Army in 1998 as a Sergeant First Class where he was a Forward Observer and was also the last soldier trained to be an aerial observer. Following his Army career, Gary spent a year doing phone and computer technician work before taking a job with the Environmental Division at Fort Riley where he worked with hazardous materials. He retired from his civilian career in 2016 as the program director and soon after started volunteering. “Everything I do is volunteering; I enjoy it,” said Gary when asked about his life outside of his volunteer work.  His face lights up when talking about the volunteer work he does because he knows that he is doing something to make the day more enjoyable for himself and everyone he encounters.

Gary is a storyteller, but he also loves to listen to people share their stories. He looks forward to seeing the same patients when they come to visit the hospital or clients when he drives them to their appointments. He develops friendships and remembers their stories.  One patient he fondly talks about is a young gentleman named Aaron.  The two have developed a friendship during Aaron’s Friday visits; Gary once spent an extra few hours in the hospital waiting on the day Aaron was receiving his prosthetic leg.  Gary wanted to be there to see and support his friend at this milestone in his care. “It’s not about you. It’s about what you can give to other people.”  For Gary, the greatest challenge in volunteering is saying no to an opportunity.  He truly enjoys his time within the community but recognizes the importance in finding balance between his volunteer work and time at home with his wife.