Senior Corps RSVP volunteer John Thomas is a people person. He does not like to boast about 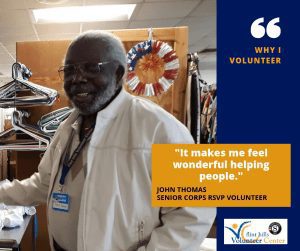 what he does, as it’s more about the people that he encounters. John was an Army Infantryman during the Vietnam War. He served our country and continues that same love by volunteering in his community. John enjoys visiting with other veterans and has traveled to the Topeka VA Hospital where he can easily strike up a conversation.
While he currently volunteers at several other local agencies, he really enjoys visiting with the residents at the Stoneybrook Assisted Living Facility. John was motivated to start visiting residents when he saw the opportunity because he was reminded of his mother, who was a Stoneybrook resident before she passed away. He understands and appreciates the value in visiting the residents and becoming their friend. His time with the Stoneybrook residents has given John a greater respect for elders and the lessons that can be learned from their wisdom. John says, “It makes me feel wonderful helping people”.